Weather-wise, this has not been a good week. As sad as I was on Tuesday that our vacation was over, I’m glad that this was not our vacation week. It’s been rainy, grey and gloomy. It has cleared off enough in the evenings for me to take Frank out for a walk, which is good because he pretty much demands it.

I say “take Frank for a walk” but it’s more of a sit these days. He used to want to wander all over, now he likes to pick a spot and sit there. Things have flipped a bit actually. We can put Zappa out  the deck in his harness attached to a leash and he’ll stay there; Frank will wiggle out of his harness as soon as you turn your back. But now I can walk Frank out front, let him find his spot, and he’ll stay put for a while – sans leash (though I still keep an eye on him). Zappa doesn’t want to stay in the yard though, he wants to go explore.

Tonight I took Frank out to his favourite spot, then took Zappa out on an extra long leash and he was actually pretty content. I took a lawn chair and my camera out and played with my 55-250 mm zoom lens for a while, then just sat and enjoyed the evening. 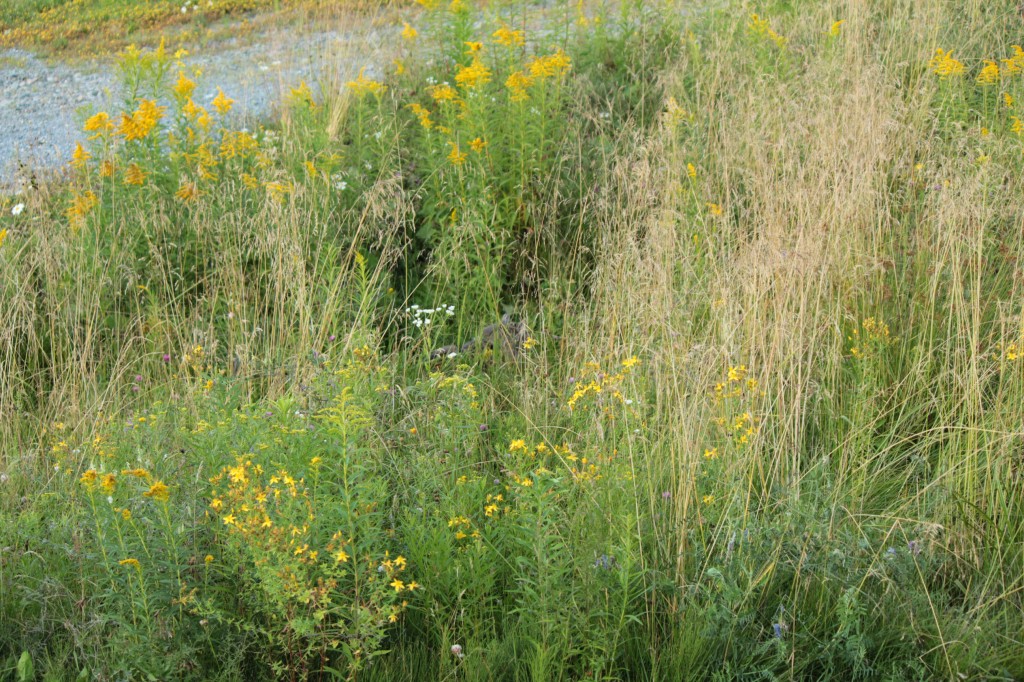 Frank hiding in the grass 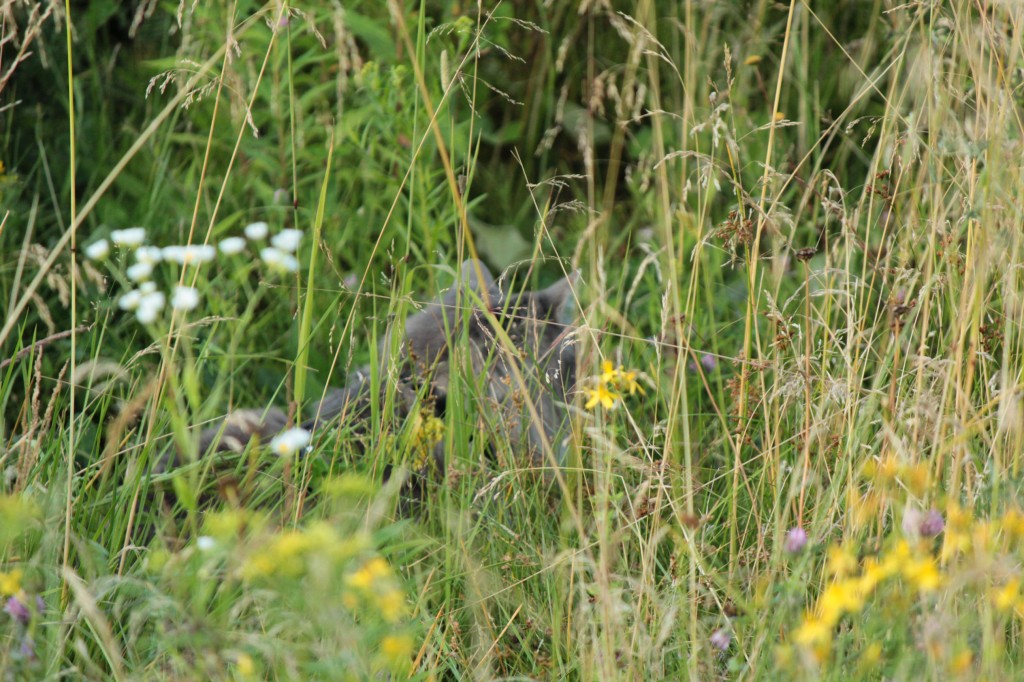 Really, he's in there! 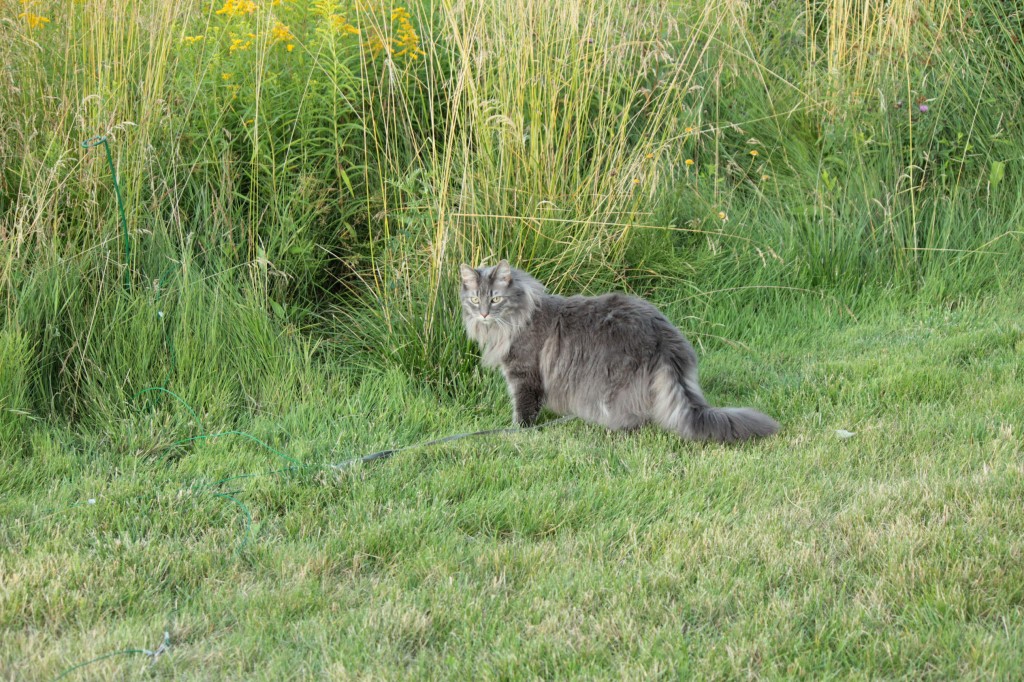 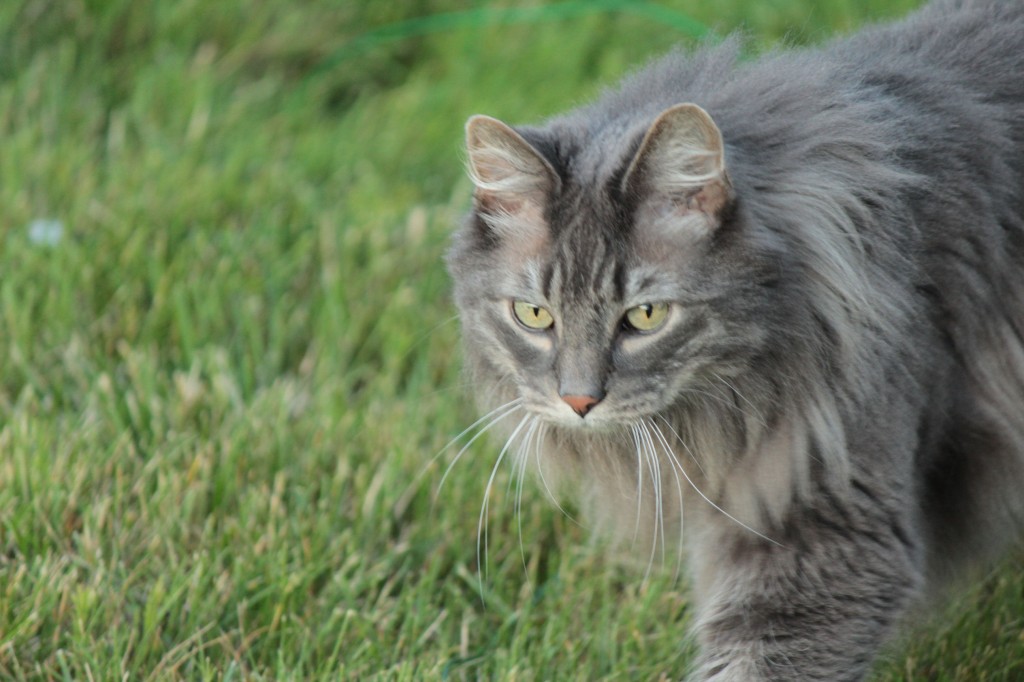 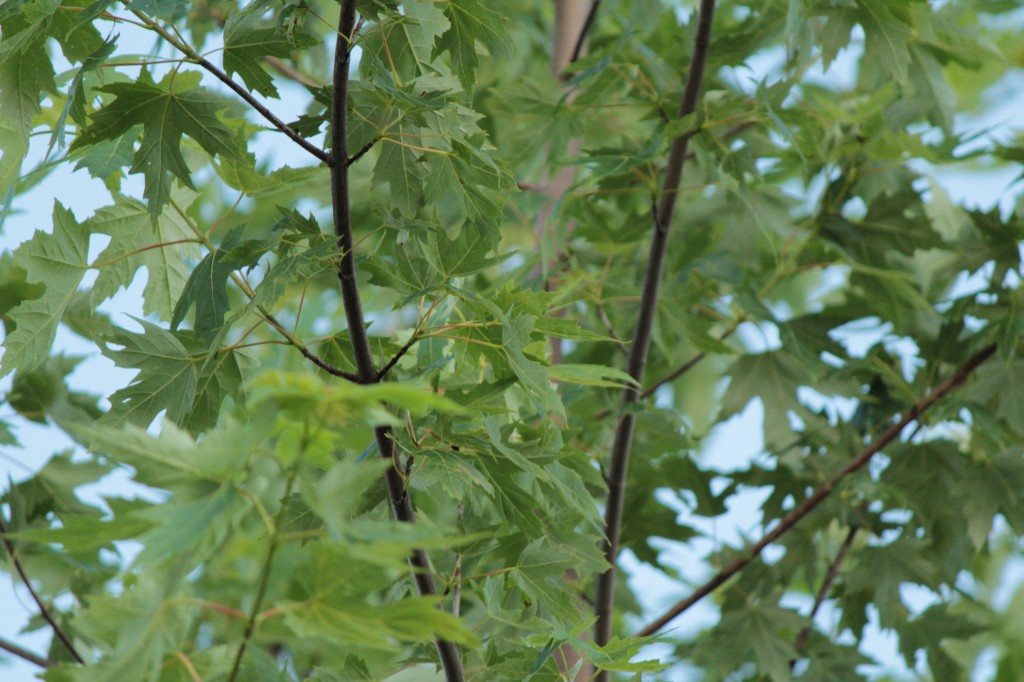 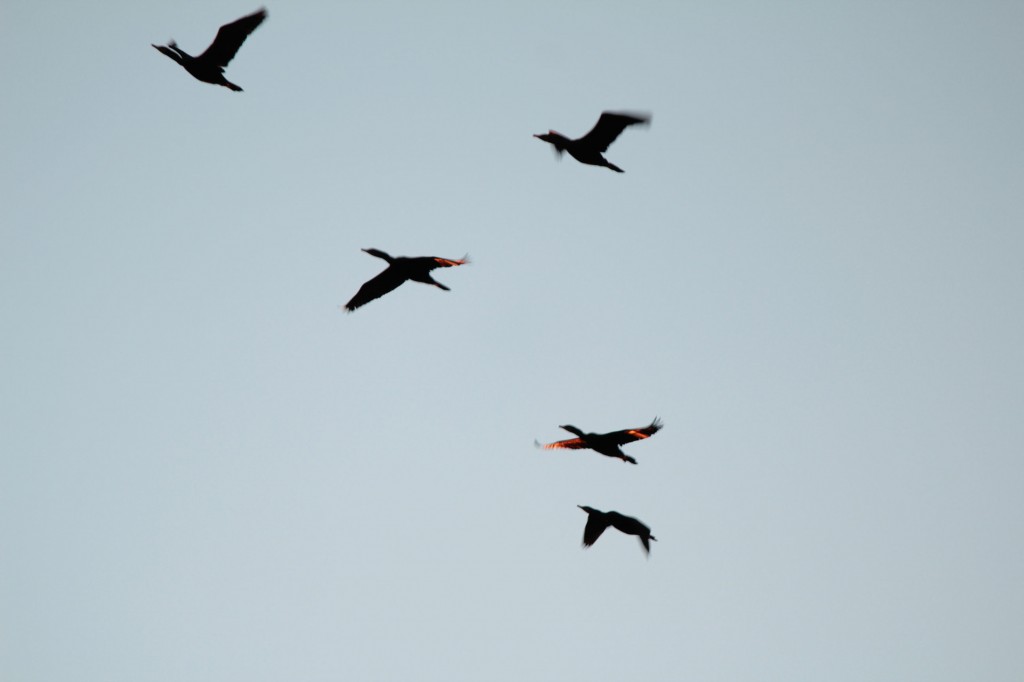 And I’ll call Rusty the Fox…

Around quarter to nine I started to get chilly and decided it was time to go in. I folded up my chair and toted it, along with my camera bag, into the house. I dropped chair and camera bag inside the door then turned around to see both cats facing off against a fox.

Split second of indecision – grab camera or go for cats? I grabbed the camera but you better believe I was ready to run for the cats. Next thing I know, Frank is chasing the fox into the next driveway. 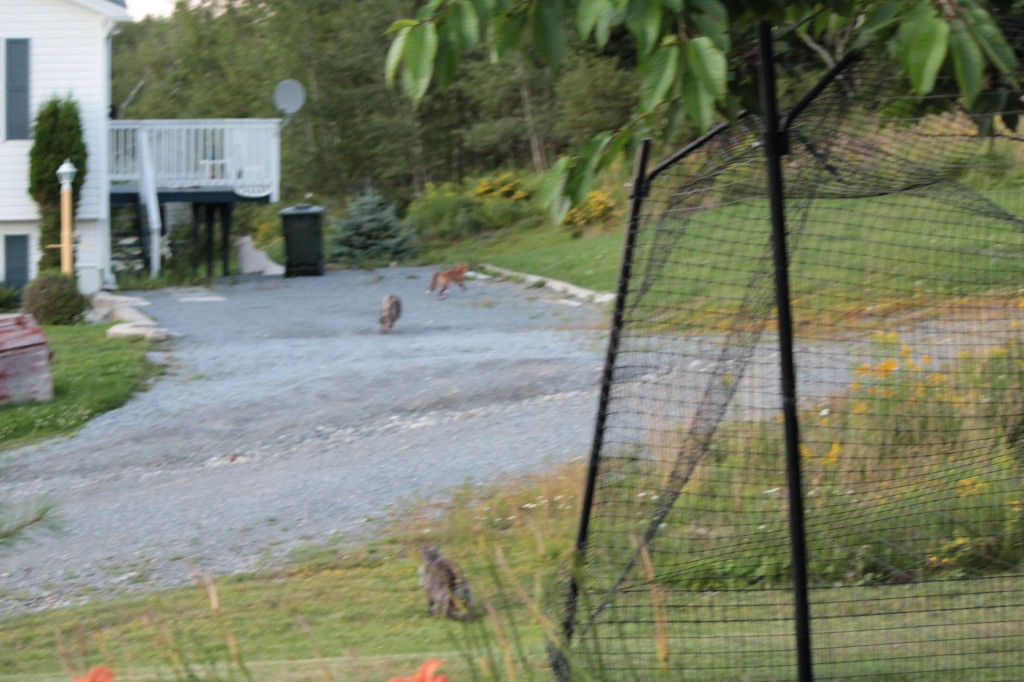 Sorry...Blurry...Critters running! Rushing to get shot!

I called for Frank and he did stop and turn around. I have no idea if it was in response to me or if he’d just decided that his job was done. 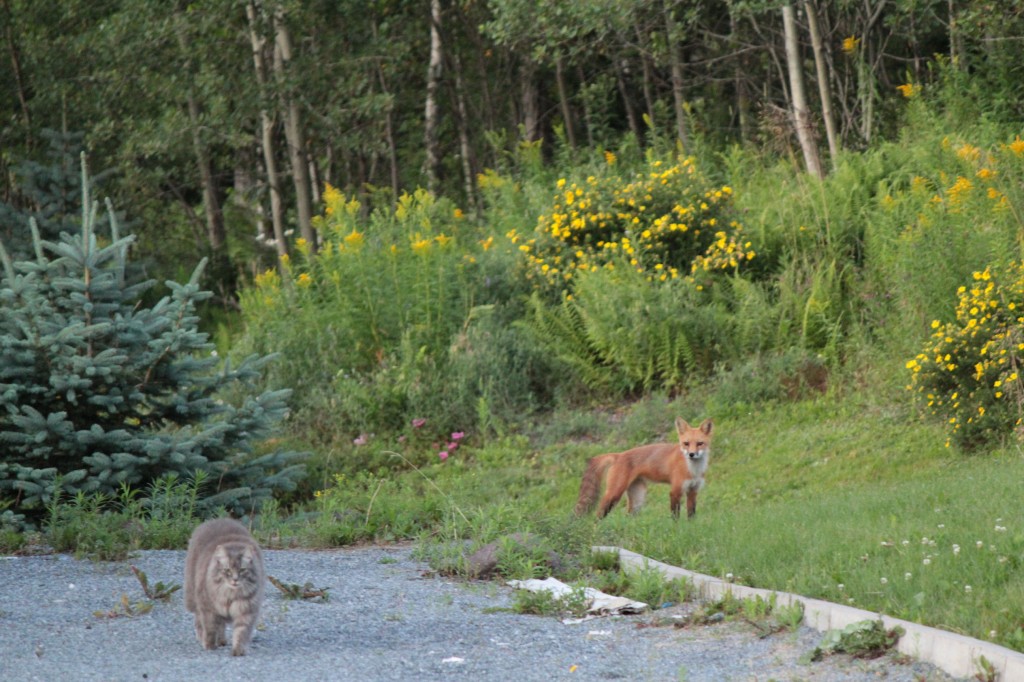 How smug is Frank? 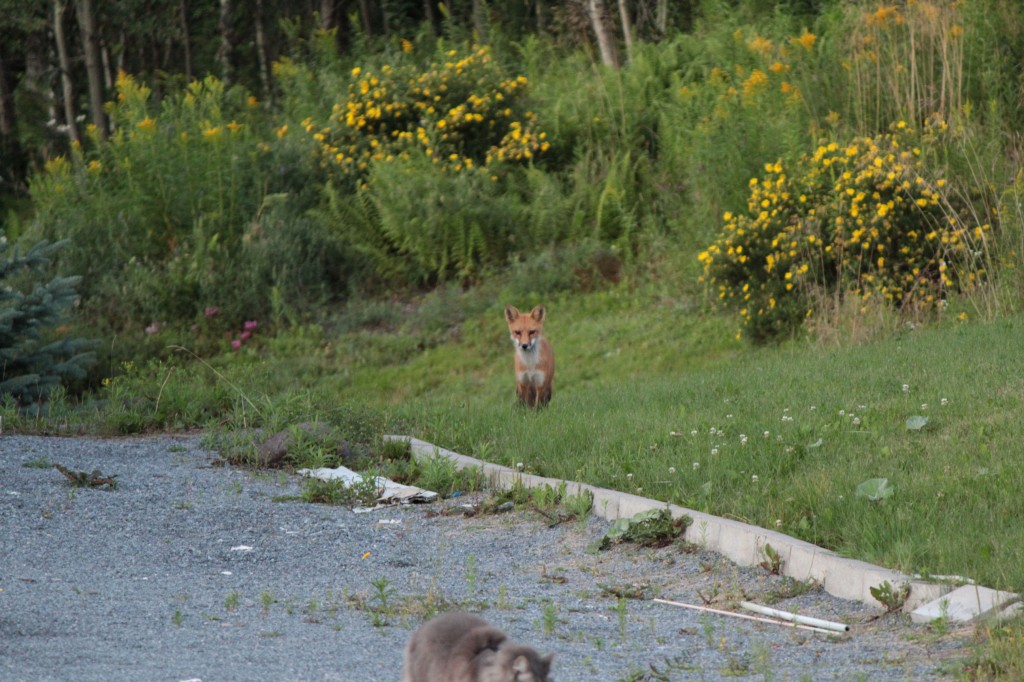 How confused is Rusty? 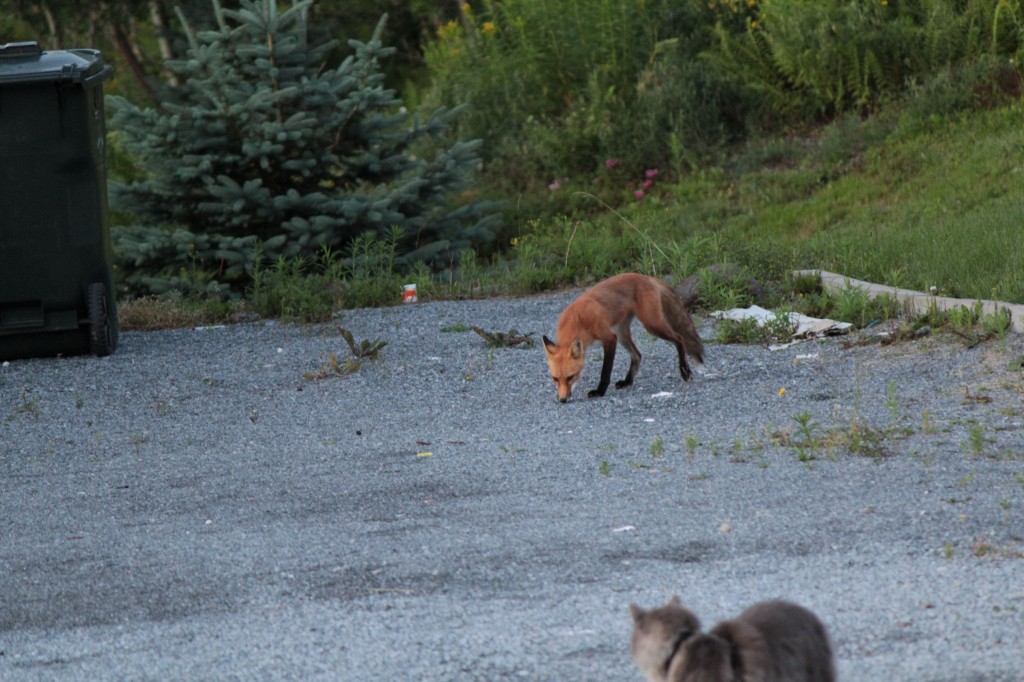 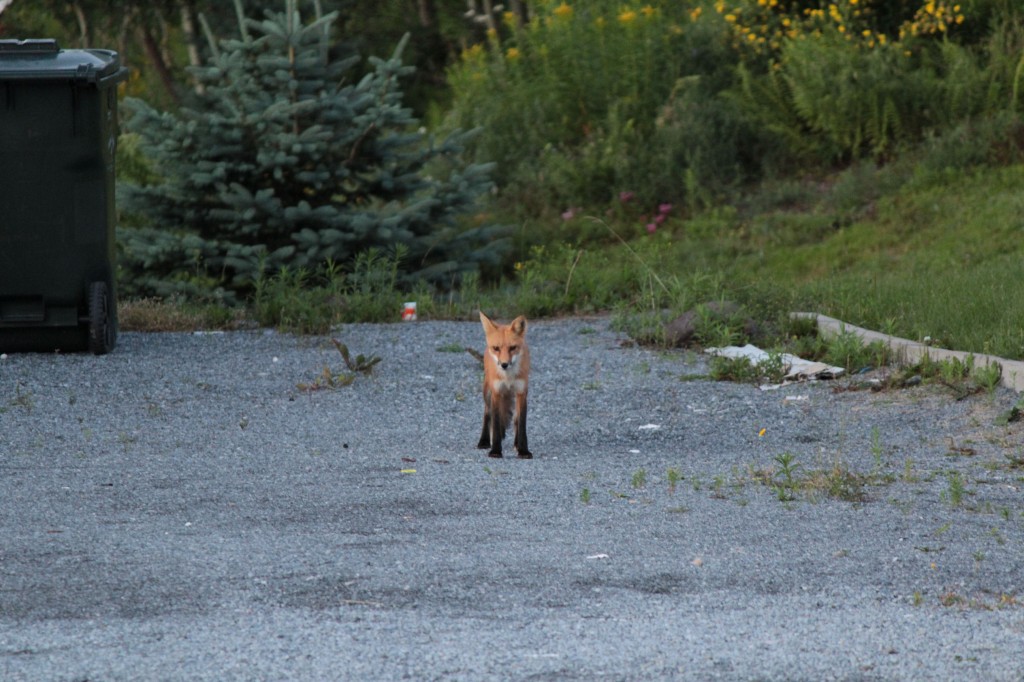 The fox recovered enough to get curious and start walking back our way so I decided it was time to put the camera down and go get the cats.

As I walked over, the fox slowly made it’s way up the hill, but it was still looking back, like it was confused. It wasn’t the only one. There were two young boys at the bottom of the lane watching all this and they asked “are those cats?” I would think that’s pretty obvious, but I guess I can’t blame them after seeing Frank all puffed up and staring down a fox.

The fearless defender is now napping on the end of the bed, secure in the knowledge that he has done his duty. Looks pretty dangerous doesn’t he? 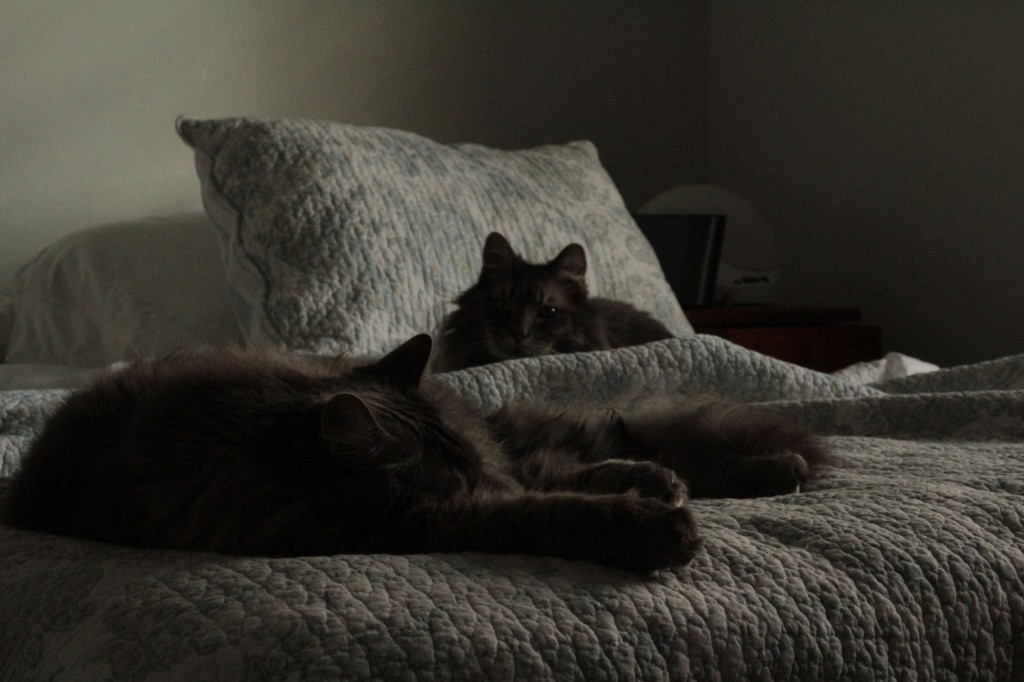 This entry was posted in Fox, Uncategorized. Bookmark the permalink.