Saturday In The Garden

Saturday I woke up around 8 am to sunshine. I moseyed my way out to the kitchen (from the spare room where we’ve been sleeping since Wednesday night, due to the dead crow our cats left for us to find in the master bedroom closet; long story), and then on to the living room to enjoy my coffee and breakfast with a little Doctor Who on the telly (ok, on PVR, but it just feels like you should say telly when you are talking about Doctor Who).

After breakfast though, I decided I’d head out to the garden before it got too hot and before I got sidetracked by other tasks. It was a beautiful morning for it!

I want to start with some pictures of my containers on the deck though. I always take pictures, intending to post them, but by the time I get finished with the main garden stuff I feel like I’ve posted enough for one go.

My little veggie garden is just that…Little! Adding some containers into the mix gives me a bit more space to work with. Our deck is not large either though. This is pretty much it. The width of the barbecue. 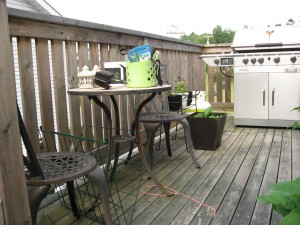 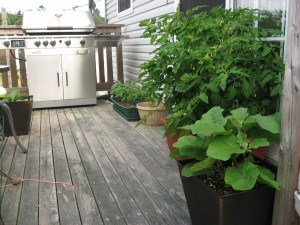 I managed to cram quite a bit on there though.  🙂 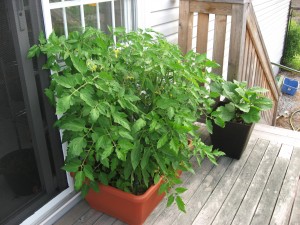 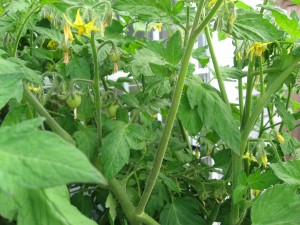 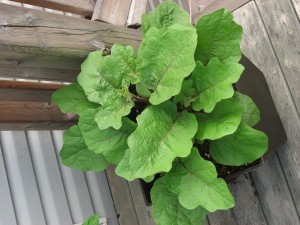 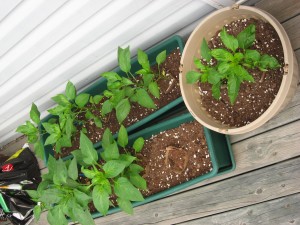 So far I’ve had less than stellar luck with the Green Thai Eggplants. I tried to grow them last year, but the weather was so dismal they didn’t grow at all. Then this year I dropped a couple of my seedlings and killed them. The ones that made it this far are looking good though.

And I seem to have established that peppers do better for me in containers. I’ve tried planting them in the garden for the past three years and they don’t seem to do well at all. The ones I have in containers look really healthy.

Oh, and just for fun… 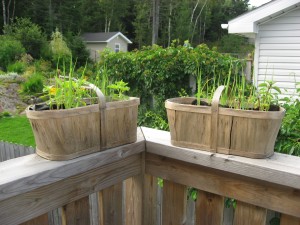 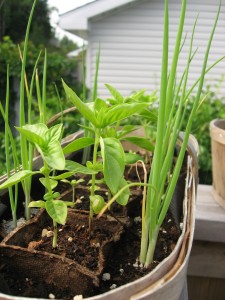 I planted basil and green onions in some peach baskets I had left from last year. Lined them with a little bit of landscaping fabric. The green onions were planted with seed tape. I’d never tried it before, but it seems to have worked pretty well.

Now for a quick trip inside the fence… 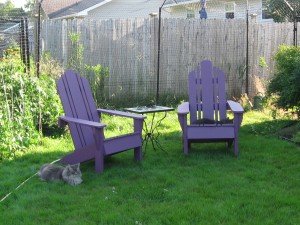 Both cats are there – Zappa is in the chair on the right.

I finally got around to picking my peas… 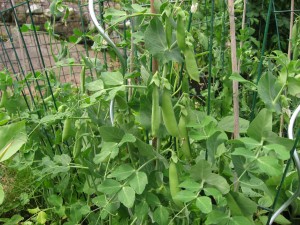 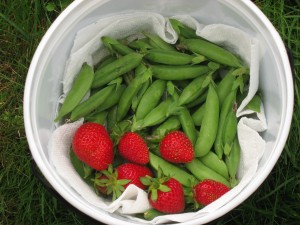 And cut back the cilantro plant that was going wild. 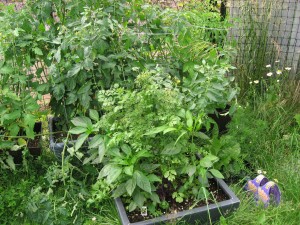 Oh, look! I have pepper plants! 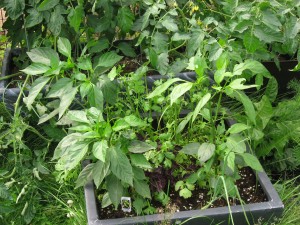 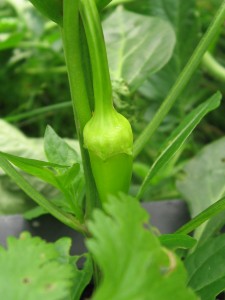 And let’s see how those tomatoes from last weekend’s post are coming along. 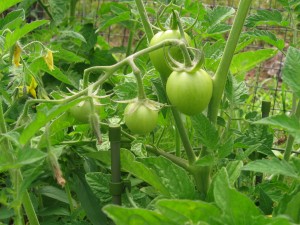 I get a little obsessed with watching the progress of my tomatoes. Expect to see a lot of these photos.

And finally, an update on our tree situation. The Bag Lady suggested dryer sheets. As soon as I saw that suggestion Friday night, I ran upstairs to tell Cory, then took myself outside with a pair of scissors and a box of Bounce.

On Saturday my Dad called (Hi Dad!) and suggested I could try steeping some dill and then spraying the solution on the trees, as they’ve notice the deer won’t eat pea plants that grow with the dill plants in their garden. So I have a backup plan, but for now we’ll see how the dryer sheets work.

Frank and I were out for a quick walk around the yard tonight and stopped to check things out. Too soon to tell if it’s helping I think, but at least things are not looking any worse. 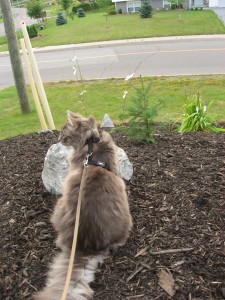 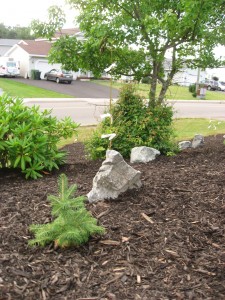 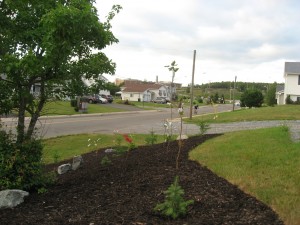 One Response to Saturday In The Garden